The Starlight Drive In was closed for a long time.
There are some who say the Starlight never closed.
Others say it was never really open at all.
They say it is a burden to own it, this theater is a curse from something that is not a part of our universe.
The stars sparkle overhead and all beneath is not but dust and in long epochs of time even that light will be naught.
If you come to the drive in on any given night you might see amazing double features such as Cult of Frankenstein, the story of the mad followers of the twisted scientist who perverts all to create life, and Mansion of Dracula, the horrifying tale of a house that’s haunted by the blood of its maker and by the memories of its owner.

Are you in the future or the past?
Can you tell if you’re real as you park next to a car that’s no longer there?
Welcome to the Starlight Drive In. We hope you enjoy the show.

From your projectionist,
Count Robot
Posted by Count Robot at 6:09 PM No comments:

Out here in the swamp where I does live we got lots of stories and the such like.
One of them here stories my pappy dun told me is what this here song is alls about.
I gots me a dog that moos and the only kangaroos I dun meet here taint got a choice to make about a whole lot of nothing.

Sometimes things get stuck in my gall wrangling head and I ain’t gots no way ways to get it out other than singing my ways through it.
When we was making this here video we was attacked by an army of ticks. They followed us home and kept a climbing and a crawling all over us. I hates ticks. It was like Attack of the Killer Ticks. Someone should make that into a movie.
Also yous might notice a seen where one of them here actors spits out some teeth. Them there are real human teeth that belong to that same actor and dun was pulled from his mouth at one point. Honest honey bunny.
Don’t say there ain’t no suffering for this arty stuff.

It’s no secret that we are big fans of Ed Wood, both the flick and the director himself. The movie that Tim Burton directed about Ed Wood is in my humble opinion the best film Burton ever made.

Ed Wood the man, is a testament to doing it yourself and just going after a vision and getting it done. Sure the results were a bizarre mess but that is their joy.
If we even get a partial bit of that joy of spectacularly hilarious disasters in our recordings then we are achieving our goal.
I think in hindsight this track is a bit too long.

I do often wonder what superior aliens would think of us if they ever came to our planet. I’m sure their first thought would be, how stupid are these monkeys?

Of course Plan Nine from Outer Space is amongst our favorite Ed Wood films. So this was our loving tribute to that film and all things sci-fi.

Transmitting from a brain dead planet,
Count Robot
Posted by Count Robot at 3:52 AM No comments:

In the not so distant past we did a gig at the premiere of Onion Town which is a variety show which is held at the historical Tapley Hall in Danvers, Mass. A nice space with some cool stuff on display. Onion Town is an ongoing series of gigs and you should go and check them out. Contact Tapley hall to find out the schedule. 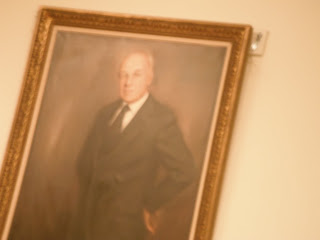 The show is hosted and run by Dan Tremblay. Dan does some goofball standup and plays some cool 60’s cover tunes. This show is not an open mike. Dan lines the acts up ahead of time.
Dan himself was up first. Seems apropos seeing as how it’s his shindig. 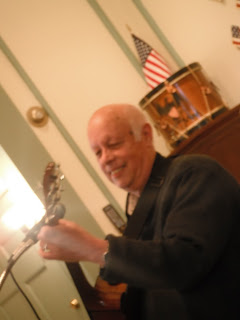 Next up was someone who’s name I’ve forgotten. Sorry. She was good though did a fun Janis Joplin cover while her son and guest star bopped about. 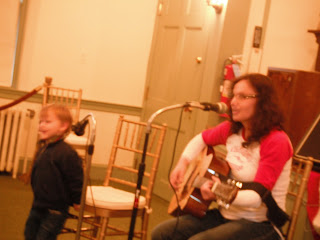 Then MC David Breen introduced the next act after ranting about Sesame Street. 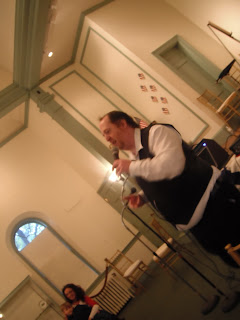 This dude was cool. Did some blues tunes with just his voice and a harmonica. 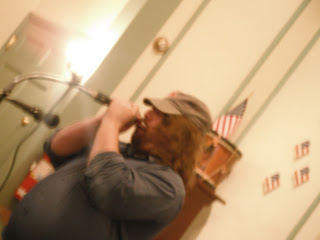 Then up next was Michael Bloom. He did three great original tunes of his. That song of his Restless is very catchy. 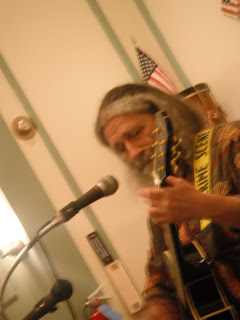 David Breen came back and introduced us after a rant about Starbucks being the people’s coffee. That one is just for you David. 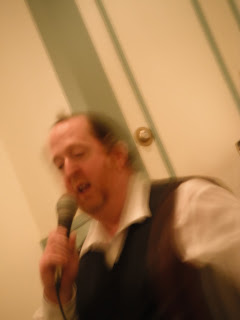 At this point Astro Al was up to get freaked out. We played three tunes. Ghost Town, Dr. Gumdrop, and Steampunk. During Steampunk the singer’s son played the part of an airship and ran all around the room. It was a darn fun time. 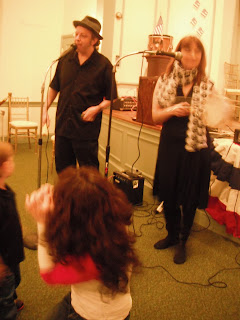 After our set there was an impromptu acoustic sing along on This Land. 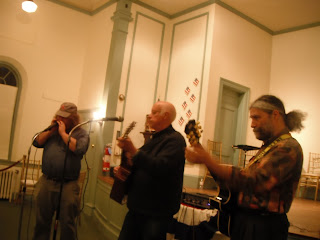 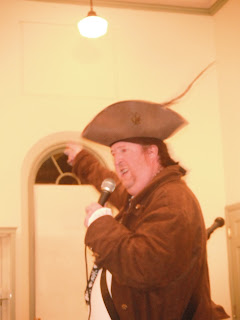 After that a woman whose name I don’t know read some jokes. 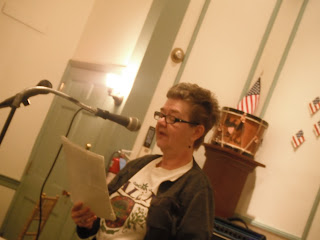 Then a dude got up and sang a few tunes. 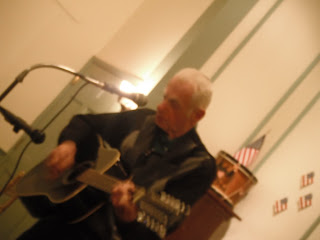 And that was it. A good night full of fun stuff. Admission was only five bucks and that was a lot of entertainment and the admission included free snack food and soda. If you like a good fun time you should check Onion Town. We will be back to play there again sooner or later.

Your scribe,
Count Robot
Posted by Count Robot at 5:10 PM No comments:


Perhaps you’ve heard the term Outsider Music. For those not in the know here is the deal, the term refers to people who operate outside the standards of music writing and don’t conform to normal song structure either because they consciously reject it or don’t understand the supposed norms of song construction (verse, chorus, etc.). It’s music by people outside the commercial industry of music.

The New Hampshire 60’s band, The Shaggs are a good example of this style of music. Other folks in this genre include Tiny Tim, Jandek, and Syd Barrett. Check them out and see what you think. Not sure if Syd really falls into this category to my way of thinking, but given the fact that he was once the lead singer for Pink Floyd his name is a little more recognizable so he does make a good reference point for this discussion.

So you might be wondering why am I blithering on about these types of folks.
Well a question came to me… Is Astro Al outsider music? Do I care if we are?
Well as to whether I care much or not… I guess I must since I’m writing a blog about this subject.
So are we outsider music? Let’s check…
We do produce our material outside of the recording industry.
We don’t consciously follow or break song structure. Often times we start a song with a chorus, which is against the thought process of most songs. Now in all honesty we never did it because we wanted to purposefully reject songwriting rules, we did just because we thought it sounded cool and felt it made the song better. When we work on our tunes we just do what we think makes that piece the best it can be we just let our minds go and if its verse, chorus, fine, if not that’s fine too.
So are we outsider music?

Call us outsider music if you want. That choice is up to you.
I will always think of Astro Al as psychedelic B horror/sci-fi music and that label is good enough for me.

From the outside realms,
Count Robot

Posted by Count Robot at 5:06 PM No comments: