An Interview with musician Brian Fowler

An Interview with musician Brian Fowler

It was my great pleasure to meet Brian Fowler back in 2004 at the Space Rock Con in Alabama. Brian is very versatile musician as you will see. 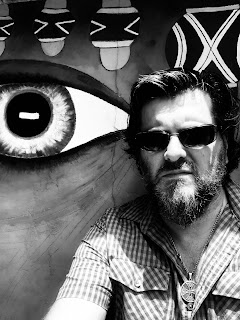 1. You play a lot of different instruments (mandolin, guitar, bass, etc.). When did you first start playing music and what instrument did you start with?

I had a guitar when I was 9 a super thick body that had  strings a mile off the fretboard.The first song I learned was “ Don’t Fear the Reaper” taught by a neighbor. About 2 years later my Dad and myself went into a music shop on my birthday and he gave me 100 dollars to buy a instrument.I found a mandolin for 69 dollars called a Bentley mandolin. All my Uncles played Bluegrass Music and we frequently went to Hear music all the time.   I bought a bass years later and started using it to make demos…I have been dabbling with Synths lately and the Theremin.

2. Tell us about your first band.

The Bluegrass Tradition was my first band as a freshman in high school  with My buddies Allen Roger’s and Todd Osborne. We would constantly play everywhere.We would walk in bars and the patrons would give us money and we would play for hours and even drink beer or whiskey once the patrons were jamming to it..We would hitch-hike everywhere and play..

3. You bounce around with genres a lot. You play everything from country to space rock. What drives you to play all these different types of music? When did you first realize you could play many different styles of music?

4. Who are some of your songwriting role models?

On the Spacerock My biggest songwriting  influences are definitely Nik Turner from Hawkwind and Chris Karrer of Amon Duul. As far as Bluegrass Bill Monroe and John Duffey from The Seldom Scene….

5. Who are some performers that inspire you?

As far as a performers on stage I would go with Arthur Brown, I love watching him perform.. Blue Oyster Cults new album inspired me to write. Bill Monroe gave me enough inspiration for life. My bands Bibb City Ramblers and The Jupiter 4 inspire me to continue making music….

6. What are some of your favorite musical experiences?

Performing Live at Suwannee Springfest with my Band The Bibb City Ramblers…Playing Alexander City Jazz Fest.I have been lucky to play 50 plus shows or more every    year for last 30 years.I have been in a few great house band situations.I have always been blessed with lots of shows to this day…..I guess   getting to play some shows with Colonel Bruce Hampton, Bob Harvey, Harvey Bainbridge etc….

7. What musical projects are you currently working on?

The Jupiter 4 along with John Pack, Sloan Leaven’s and Jim Dunn from Spaceseed. I am on five  of the six Spaceseed albums with John Pack. We have been friends for years and wanted to do something new.The Jupiter 4 release is  out now on Spotify and a new album J42 is in the works….. The Bibb City Ramblers formed in 2007 is still active and playing and just recorded “Simulation” a Bluegrass Concept album available in band camp,Spotify etc…..Bibb City are discussing the next record and currently are playing live a lot…..

8. You created a word called, Egatoid. Can you explain what Egatoid means and it's origin?

My friend CHUCK WADDELL created the word.It’s definition is “The all purpose word of Excitement “. Chuck turned me on to Hawkwind and Nektar. He is still living and lives in the woods of Kentucky in an area called The  Wonder Woods waiting on the Apocalypse.

Thanks for thinking about me for interview….